Reading Time: 4 minutes
As the digital world is enshrouded by the aspect of confidentiality related to user data and fortification from the view of malicious people, the popular instant messaging app, WhatsApp has finally given in to discuss regarding security. This is definitely a good news.
The Facebook owned brand disclosed some information related to the manipulation of end-to-end encryption which it has integrated with itself so as to safeguard the personal chats and other private matters discussed with the help of the app. Soon after the worldwide launch of this aspect, when the user base avails the app for chatting or any other purpose, they will be greeted with a message noting that all the activities carried forward with the help of the app are end to end encrypted securely and will finally conclude by noting to click on the displayed link to get additional information. In the event the user wants to get more insight regarding the same, it is elucidated below
In order to make this feature feasible, the instant messaging app manipulates the working logic related to the Signal product developed by Open Whisper System so as to code the data from the message sender’s device and then they are decoded by the receiver’s device. This ensures that only the people taking part in the chatting can view the messages and it is safeguarded from prying eyes including that of the app itself.
Such integrated parameter of security also applies for the WhatsApp for Web feature as well. WhatsApp affirms that end-to-end encryption is integrated by default and it can never be deactivated in any scenario.
It involves the manipulation of a set of two keys (public and private) to encrypt and decrypt the messages and the role of an intermediate server to ensure that the encoded message reaches the recipient where it is decoded with the help of the key. It is as simple as that.
Emphasizing on how powerful this end to end encryption feature is, Alan Kao a high ranking employee from WhatsApp stresses that the chances of third parties or hackers to avail and manipulate the encryption keys and decrypt the messages are absurdly low to the point of non-existence. In the impossible event when the hacker was able to steal the key, their ventures become futile as they could view only a single message. This is due to the integration of a specific encoding key associated with every messages and chat. Thus the attempts made by hackers to avail entry to any message are a waste of time and an impossible venture to succeed.
With the rapid progress of technology, there has been a revolutionary change related to the aspect of online interaction and other modes of communication as seen from the giant leap from the aspects of email and chatting apps to the concept of instant messaging.
Although the general user could not be wary about the fact that WhatsApp has progressed to integrate itself with the user base as an effective mode to interact with others. This is implied by the statistics showcasing the astronomical 1.3 billion monthly users with over 1 billion users manipulating the app for interaction on a daily basis.
Further, the brand emphasized on the aspect that India is its largest overseas market comprising of more than 200 million active users on a monthly basis. There has been a revolutionary transition in the way how the Indian citizens are manipulating the instant messaging app. It has seen its presence evolved from being a mode for chatting to aiding in the resolution of issues, developing cliques and being a portal to access the government officials directly.
The potential behind the Indian market is very much evident in the rapid proliferation of user accumulation for the popular instant messaging app. It is not surprising or a confidential matter related to the brand making strides and striving to bring the aspect of payment transactions with the app. This is signified with the aspect of UPI associated with it. However, the venture related to the same and how its progress shapes up as time proceeds along with the current status was not disclosed by a spokesperson from WhatsApp- Carl Woog
Alan emphasized that the development of the instant messaging app was carried out with the aspect of security being incorporated as a major game changer. As related to the use cases, the aspect of fortifying the WhatsApp messages becomes a top priority and need of the day.
Despite the advantages and benefits associated with the implementation of end-to-end encryption, there are some traits which are restricted when it comes to securing the data in the app. To quote an instance, it is handy and confined only for the chats and conversations which are transmitted by using the app. In the event, a third party keyboard is manipulated, then the chances of the keyboard tappings to be interpreted are likely and there is no guarantee of safety associated with such apps.
In addition, the end to end encryption aspect does not take total care of the chatting and conversation which were archived. Based on what Kao had to state, such backups are coded when they are uploaded to the cloud services like iCloud related to the iOS operating system and Google Cloud associated with the Android operating system.
Provided the uploading is done with respect to the backup files, the data is secured and fortified with the norms and guidelines which are developed by both the giants Apple and Google. Although this venture seems to be beneficial, there are events where hackers have invaded the cloud platform and can easily avail the confidential data associated with the user base. 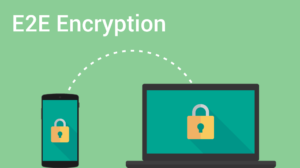