Developers always want to enrich their knowledge and be updated with new technologies for the purpose of creating high-performing applications. Let’s see about Flutter which is creating ripples now in the mobile app development world. Google I/O 2018 gave a lot of attention to Flutter. Reportedly, the rate at which Flutter apps are published on Google Play is seeing a rise.

Flutter is not in its beta anymore

Google released Flutter 1.0 on December 4, 2018. Starting from now you can develop web frontend through Flutter. Hummingbird is a new project announced by Google for the purpose of bringing Flutter apps to the web. Here there is the facility of running the same code both in the browser and on the phone. It is present in beta version for now.

Flutters give the advantage of a hassle-free and simple cross-platform mobile app development. There is no requirement of developing an Android app and iOS separately. You just require a single codebase for both platforms.

Some amazing facts about Flutter

Now let’s see the pros and cons of this hot framework:

Developers consider Flutter a boon because of its quicker and more powerful mobile app development. This is termed as hot reload. Developers have the advantage of viewing all the changes they have performed on the code straight on the app. It only takes a few seconds to view changes.

With the help of Flutter, the designer or tester can collaborate with a developer on the UI by performing changes and viewing them instantly.

However, there are few rare limitations to hot reload wherein this type of reload is not supported at all.

In mobile app development, iOS and Android are the two main platforms. There are different ways of developing for both of them by writing different codes. Hence, we can see the importance of cross-platform development in the mobile industry. There is both less time and effort due to this while developing an app.

With the help of this process, there is no requirement to build separately for two platforms. There is just one building with the help of one codebase; you can apply that codebase for two applications. Flutter doesn’t rely on the platform since it has its own widgets and designs. Moreover, it’s possible to differentiate your apps with Flutter.

The heartening thing about Flutter is that it requires less testing. This is because you have the same apps for a couple of apps. Here the quality assurance process can be swift. The developers code automatic tests, not more than once due to one database.

Flutter helps you to handle the scrolling in a hassle-free manner.

Designs which cannot be ignored by the user

Flutter is designed in such a way that you can build your own widgets conveniently. You can even personalize the existing widgets.

The advantage of the same app UI on older devices

Your brand new app will not look different, even on previous versions of Android and iOS systems. No extra cost is needed for supporting older devices.

Are you waiting to show your product to investors as early as you can? Then you can build a Flutter mobile application that appears native on both Android and iOS. Hence, your investors will have a fair picture of what your MVP (Minimum Viable Project) looks like. When you develop two separate apps it would consume more sum and time.

Does Flutter consist of any con? Let’s see them below:

The libraries and support are still in the nascent stage

Google’s support for Flutter is quite good and there are several helpful libraries with functionalities all set to be deployed. However, Flutter is still in the beginning stage and there is not the presence of every needed functionality. This implies that the developers are in a situation to develop them on their own and this takes a lot of time. But the heartening thing is that Flutter is progressing at a swift pace.

At present, Flutter is not exhaustively supported by CI platforms including Travis or Jenkins on a large scale.

Flutter is indeed worth a try. It has a lot of benefits for business and development teams. You can easily develop amazing, high-performance mobile apps that suit your personalized requirements. If you want an app for both Android and iOS Flutter is worth regarding.

Mr Monish Sinthala is the CEO of a leading Flutter app development company in Chennai. He has a great vision for his company and strives to achieve it. He is very cordial with his staff and he leads by example. His streamlined approach and dedication towards his company have made him reach the heights that he is enjoying today. He believes in working with discipline; at the same time, he gives the employees the needed enjoyment. He makes sure that He is updated with the latest technologies and also imparts his knowledge to the employees. He reads a lot of books and loves to go for adventures. 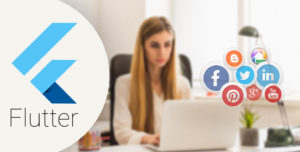