It is well-known about how popular mobile apps really are. In the third quarter of this year, the Apple App Store featured somewhere around 2 million apps and its Android equivalent had more than 2.1 million apps.

This is indeed a huge competition. Here the development time of an app plays a significant role in defining when your app will get uploaded to the App store before your rival does.

Thereby the typical question every client asks their app development team is the time taken to get their ambitious app developed.

Unfortunately, there is no clear answer to this million-dollar question as there are various factors that impact the entire app development process. The article will detail the major ones in detail.

(i) The Scope of a given App

Begin everything by defining the scope of your mobile application. Defining the scope implies that you have to get insight on several things. Some of them include detailed insight into your audience-base requirements and finding out if your app does indeed satiate their needs. Most importantly try to find if your rivals are also having the same idea as you.

(ii) The features and functions offered by the app

The time taken for every app design related work includes the features and the functions present within it. As mentioned earlier, when it comes to understanding the time involved in app development see if your app offers a unique solution for the user base demand. Also, include its operational methods and how exactly will it manage all the data.

Create a storyboard and understand everything regarding the UI of your app and the interconnections between all the screens. The more functions and features incorporated then more will be the development time. Also, take care to know the OS for which the app is built. This is because Android App development is longer than its iOS counterpart.

Speaking of defining the Scope, for a small app it can be done in 1-2 weeks time and for the big ones, it will take 3-4 weeks including the requirement gathering work as well.

Here both the developer base and its coder base has to find out if the front end design is compatible with every back-end solution.

If this isn’t carried out effectively then there is definitely a chance of everything being reworked because something wasn’t working as expected on the front-end.

So the design work in the case of a small app takes somewhere around 2-3 weeks and for advanced ones, it can go to 9 0r 10 weeks on an average.

Testing your app before it is uploaded on the App Stores is for sure mandatory as you can purge all the bugs in it. The developer base will build and simultaneously test the app so that bugs in the code are eliminated. However, this testing called Alpha Testing isn’t sufficient as there is the omnipresent likelihood that users will encounter bugs. Thereby we have to do Beta Testing as well.

As a majority of the bugs are fixed during Alpha Testing, Beta Testing won’t be that long. On an average, this Beta Testing can vary from 3 weeks to a month.

So taking all the aforementioned factors into consideration, app development may vary from 2 months for a basic app to around 4.5 months for a bigger one. Again this is only an approximate estimation as there are other factors like skill set of the development team, the time involved in testing and the operational methods which all could alter things considerably enough.

Ensure that you can avail the development team after some few months post app launch so that they can work and sort out some bugs that are unfortunately encountered by users in the thousands.

Offering exceptional Mobile Application Development Services across the entire Toronto based region, the team at Pyramidion Solutions is very passionate in its work to get every one of its clients ahead of their competitors by developing a powerful mobile app. 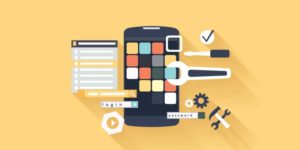