Explaining the Most Popular Mobile App Development Trends this Year

Taking into account that mobile app downloads and the user base have swelled to the billions in the last year, there is no stoppage to the power of mobile application development as one of the chiefly used forms of lucrative businesses at present. Thereby an effective mobile app development strategy is mandatory to establish a strong base in the highly competitive landscape of enterprises.

Yet, that alone won’t suffice as you have to be abreast with what is hot and happening in the related domain of mobile app development. In order for you to gain the upper hand to satiate the user base of yours and be the top ace in the business, this article will throw light on what are the best mobile app development trends for this year 2018.

The era when Artificial Intelligence was used primarily in imaginary concepts and was the stuff of the Sci-Fi world is now over. As a growing mobile app development trend, AI is used by enterprises in the domains of Chatbots, Machine Learning and the such.

Both Apple and Google have integrated the potential of Augmented Reality in mobile apps in the form of Apple ARKit and Google ARCore as seen last year. Further seeing the role of AR and VR technology as key players in advancing the gaming and entertainment industries, they will surely reign supreme in other industry verticals as well soon.

When it comes to the concept of Cryptocurrency, Blockchain has accomplished a lot in terms of popularity in such a short span of time. Further apart from Cryptocurrency it is used in other mobile apps to enhance their security powerfully. It is predicted that the technology of Blockchain will find more prevalence in 2018 and way past it.

The advent of the Internet of Things concept (IoT) has made it prominent with respect to Smart homes, Smart Cities and the such. Research reveals that by the beginning of the next decade, there will be 50 billion connected devices on a global premise. This ascertains that IoT will be dominant as a mobile app development trend looking ahead into the future.

One of the rapidly developing mobile app development trends for this year must surely include Mobile Cloud Computing. An era where people can never have to worry about less space in their devices with regards to storage is long gone seeing the potential of a cloud to store immense data securely. This point will help enterprises to overcome the problems associated with the BYOD practice.

One of the mobile app development trends which were rocking in terms of services last year and will proceed with even further momentum in the future is Geofencing and Location Based Services. Another prominent advancement is Bluetooth Beacons primarily used in real-time offers and ads related to the actual location. Thus it can be said with confidence that more and more apps will adopt Bluetooth Beacon working into their functionality. 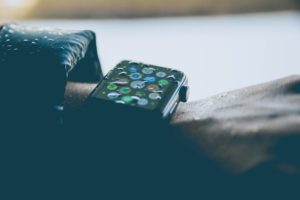 Explaining the Most Popular Mobile App Development Trends this Year