Angular which is Google’s famous and effective JavaScript Framework related to the development of mobile and desktop applications has been the red-hot trend in the market ever since its inception in September two years ago. Before last year’s end, 5 versions were released where every newest addition was superior to the last. Developers are anticipating with excitement regarding the yet to be released Angular 6 and the beta version of it has been rolled out at this point.

The main objectives which it wants to fulfill have been to remain speedier, smaller in size and less demanding. Angular 6 keeps on remaining consistent with that subject and has an assortment of various new features that will enable engineers to accomplish things effectively than at any other time.

Outlined below are some of its brand new features:

In order to accomplish the objective of being small, quicker and simpler, the version 6 beta highlights another renderer called Ivy. The beta additionally includes a discretionary, backward-compatible generic type with regards to support typed nativeElement. Encompassing every one of these effective features, Angular 6 will formally roll out very soon, clearing the path for Angular 7 in September or October of this year

Discarding the creation of comments

The beta variant of Angular 6 has designers energized and in light of current circumstances. The build optimizer effectively makes the application small in size, whereas the enhanced compiler makes things very much speedier and the general experience is amazingly simple and natural. Angular 6 effectively eliminates a couple of shortcomings as seen with the previous version, for example, the issue with production build source maps. Thereby take a glimpse at the brand new and loaded Angular 6 immediately. 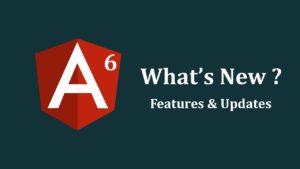